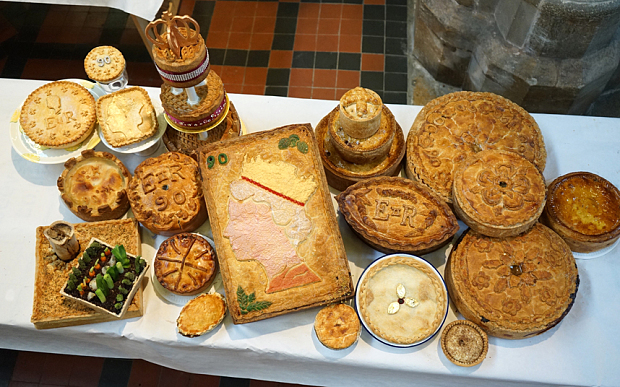 It is a controversial decision, likely to cause consternation among pie and pasty connoisseurs the length and breadth of the country, even prompting talk of a boycott.

But a pasty has won the coveted top prize at this year’s British Pie Awardsfor the first time, beating 815 other entries to take home the title of Supreme Champion.

The Beef Skirt & Vegetable Pasty, lovingly created by the family-run A.F Huddleston Butchers in the Lake District, was said to have had the judges mouths watering with its even bake, glaze and flavours.

Matthew O’Callaghan, chairman of the British Pie Awards and Melton Mowbray Pork Pie Association, acknowledged that the decision to award the prestigious trophy to a pasty would fuel debate about the difference between a pasty and a pie.

“I know many will be surprised to see a pasty winning the British Pie Awards, but the definition of a pie is a filling totally encased in pastry,” he said.

“Pies come in all shapes including round pies, square pies and pasties. A pasty is simply a subsection of a pie.”

The difference between the two is all in the structure, he said.

Pasties tend to be defined as a singular, folded pastry case with a crimped lid and a savoury filling, typically of seasoned meat and vegetables.

Pies, on the other hand, traditionally have a base and sides and a separate lid. A pie is defined by the Oxford English Dictionary as “a baked dish of fruit, or meat or vegetables, typically with a top and base of pastry”.

This definition is taken extremely seriously at the annual British Pie Awards. Anyone attempting to sneak in an entry with a potato or a meringue lid, or even a lattice top, would have found themselves out in the cold.

But the decision to award the top prize to a pasty immediately generated outrage on social media, where it was variously described as “scandalous” and “an outrage”. It was even claimed that some pie makers would boycott next year’s event.

Pierate, a pie reviewer and former judge at the awards, described it as “a sad day for pie fans” and said that for the first time, it would not be rating the winner.

As a judge at the awards the last 3 yrs, we are seriously considering a boycott over this. What next? Sausage Rolls?”

“And slices, and beef wellingtons… this is Political Correctness gone mad!”

Hot or cold and sweet or savoury pies can be entered in the renowned competition. However, all pies must be totally encased in pastry with a closed top and fit into one of the pre-assigned categories.

All pies, except the specialist class, must be commercially available in the UK.

Mr O’Callaghan said the winning entry was particularly impressive as only 30 of the 816 entries, assessed by 120 judges, were pasties.

The small, family run business also triumphed against some of the biggest names in the industry, including Pieminister and other manufacturers who supply all of the major supermarkets.

“The winning pasty was outstanding,” he added.

“It looked so appealing; an even bake with a beautiful glaze and a perfect crimp. Eating it was a delight, well balanced flavours, tender meat, small chunks of vegetable and a delicious gravy with just the right amount of seasoning. One of the best examples of a perfectly produced pasty.”

He said the award could be life changing for the Cumbrian butcher and said that people would be “beating a path to their door”.

“Pasties have been a feature of British cuisine for centuries ranging from the Forfar Bridie in Scotland through to the Midland’s Bedfordshire Clanger and down to the iconic Cornish Pasty. I’m pleased that we now have an award-winning pasty to shout about from Cumbria.”

As well as the Supreme Champion, an honourable mention went to Turner’s Pies Ltd in Bognor Regis, West Sussex, which achieved four first places within their individual classes.

A speciality class, designed to encourage pie makers to get creative with their baking, this year required a pie fit for The Queen’s 90th birthday celebrations and was won by a Victorian Corset Pork & Chicken Pie produced by Walker & Son.