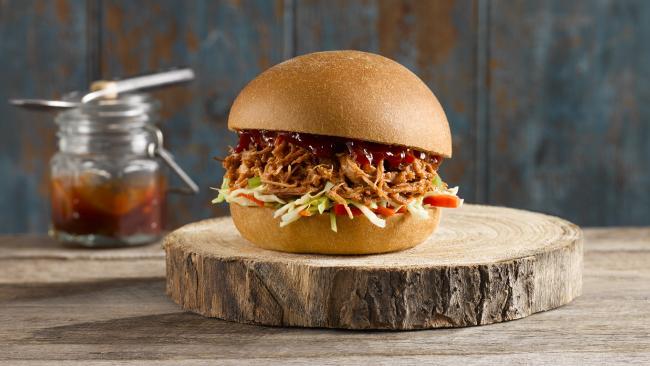 Available only for a limited time, the Kentucky Pulled Pork Burger is filled with pulled pork, coleslaw and barbecue sauce on a brioche bun.

The Kentucky Pulled Pork Burger, which contains pulled pork, coleslaw and barbecue sauce on a brioche bun, is available across all KFC restaurants in Australia for the next four weeks.

“We have a popular core menu but we also know customers want to try something different every so often,” a spokeswoman told news.com.au. She confirmed it’s the first time pork has appeared on KFC menus in Australia.
“The Kentucky Pulled Pork Burger is something completely different to what most people will expect from KFC,” she said.
“We are very proud of our southern heritage and this is why we have branched out from our chicken into another favourite from the region.”

But fans of the fast food joint took to social media to question why a chicken restaurant is now selling pork. “All I have to say I’m done with you KFC. Since when pork is chicken? This has put me in a situation that I won’t go to KFC anymore if u are going to sell pork at your store …” wrote one man on Facebook.

The comments on KFC’s Instagram page were similarly unflattering.
“What the f*** pork at KFC?” wrote one person. Others said “WHAT THE HECK KFC”, “wtf is this??” and “that’s not chicken”.

This is KFC’s second foray into gourmet burgers. In March it launched a limited edition Zinger Black Burger — a chicken burger with a jet black bun made from vegetable carbon.

It is not yet clear whether KFC’S pork burger will be hitting the UK.