The productivity of the UK pig breeding herd improved again in 2015, according to latest figures from Agrosoft, but the gain was smaller than in most recent years.

The number of pigs weaned per sow per year averaged 24.1 across all breeding herds, 0.2 more than in 2014. This is the smallest rise recorded since 2010, with increases of 0.4 to 0.6 in the intervening years. Both indoor and outdoor herds recorded similar improvements. Modest gains in the number of piglets born alive per litter and pre-weaning mortality were behind the rise in productivity, partly offset by a slight drop in the number of litters per sow. 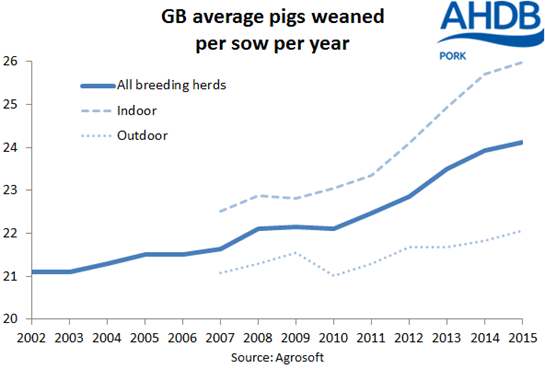 The picture was less positive for the feeding herd, with both rearing and finishing stages recording a higher Feed Conversion Ratio in 2015 than the previous year. There was a particularly sharp rise in the rearing herd, from 1.71 to 1.89, with daily weight gain lower as well. The change was more marginal in the feeding herd, from 2.67 to 2.69, which may just be the result of slightly heavier finished weights.

The average finishing daily liveweight gain was higher than in 2014.

The mixed picture on physical performance over the last year suggests that many producers can do more to make improvements, especially as GB performance still lags behind much of the rest of the EU.

This would also help to minimise production costs and, hence, maintain margins, which is particularly important in the current challenging market.