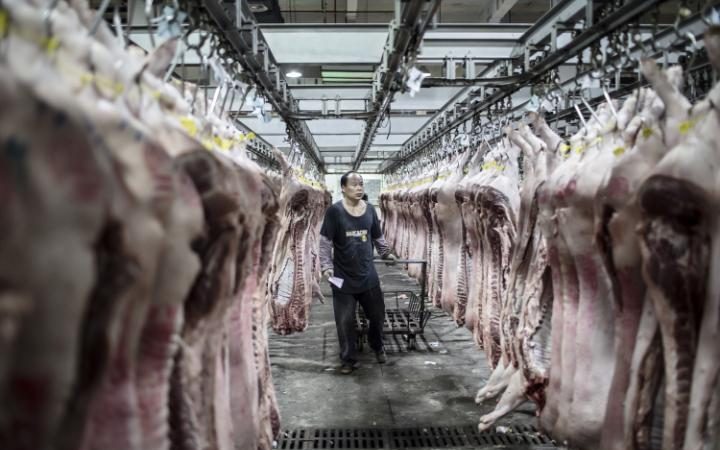 On one side of the world, vast and icy warehouses packed to the rafters with frozen pork thrum quietly away in every corner of China. On the other side of the world, a cargo ship sets off from Dover loaded with more carcasses to add to the shelves.

The ship, which will sail from Dover to Gibraltar, from Gibraltar to Suez and then across the Indian Ocean to China is one of many such vessels; so far this year, some 21,000 tons of British pork have been shipped to China, up 73pc on the previous year.

Thus begins a curious tale of how pigs born in the UK are shoring up Chinese communism, with the help of those mysterious warehouses. Even if none of the British shipment actually does find itself stacked inside – we cannot know for sure, because the Chinese pork economy is as opaque as it is vast – it will, if indirectly, help the Communist government keep its stores full and its people fed.

For this is the point of the warehouses: together, they are China’s “Strategic Pork Reserve”, a colossal, sprawling system whose goal is not only to maintain the price of pork, but also to maintain the Communist party’s hold on power.

The connection between pork and power is abstruse but goes back first to China’s millennias-old love affair with the meat – it was by the Mekong River, which runs from the Tibetan Plateau down to Thailand, that boars were first bred into docility – and then to post-Mao economics. Thanks to the massive expansion of its economy since the 1970s, China now consumes half the world’s pork.

At 148lbs (63kg) per year, the annual meat consumption of the average Chinese is mid-table in the global rankings, but pork has a far higher market share than elsewhere. It is the country’s favourite meat by some distance, and is so important to the Chinese that the government fears unrest if prices climb too high, not least because it can account for up to a quarter of inflation.

Hence the reserve, in some ways the truest enaction of the phrase “pork barrel politics” that could ever be. It was created in 2007, after blue ear pig disease tore through the Chinese pig population, causing pork prices to rise 87pc in a year. This was far from the first spike in the pork price, and with increasingly intensive farming making outbreaks more and more likely, it would not be the last.

These gyrations are disquieting for a government which knows the way to a population’s heart is its stomach. “This is the core of the Communist identity,” said Dr Kent Deng, a sinologist at the London School of Economics. “In European countries, people accept there is a free market, but the older generation in China is used to cheap food provided by the government, especially in the urban areas.

“Pork is a barometer of food prices, which have a lot of bearing on society. The government has been promising affordable food, and if people can eat, the Communist Party has the legitimacy to rule China.”

Within months of the outbreak, China finished a deal with Gordon Brown allowing them to ship in pork reared in this country. British diplomats thought it would amount to little more than offal and trotters: they were wrong. Meanwhile, in every major city in the China the government began stockpiling frozen pork. When the price falls, they buy. When it rises, they sell. Thus a fragile equilibrium is maintained, and the Chinese people can continue to eat cheap pork untroubled.

As with much Chinese governance, the exact workings are known only to those within the Party. But we know that the reserve is operated by the state-owned China National Cereals, Oils and Foodstuffs corporation, rather than the Strategic Reserves Bureau, which oversees stockpiling of commodities such as oil and cotton. We also know that there were pre-existing food depots, which are likely to have formed the basis of the reserve’s infrastructure, and we know that there are fleets of cargo ships with on-board freezers.

Not that all the reserve’s stock is frozen. Some is alive and oinking. According to The Political Ecologies of Meat, the book by the geographers Jody Emel and Harvey Neo, the live stock is rotated every four months between 200 or 300 commercial farms, of which there is one in almost every province.

Between the frozen stock and the live animals, the reserve holds at any given point around 200,000 tons of pork. It is a fiddly business, given that pork is best frozen for only four to six months, but while the reserve is thought to hold less even than 0.5pc of China’s total pork stock, it is good enough for the government to have called on it frequently.

Large-scale releases of pork came in the summer of 2011, for instance, when pig meat prices had gone up 38pc in major cities, and in early in 2013, when festive feasting had again strained suppliers. The floodgates were opened again in May, with pork prices at record levels after a rise in the cost of feed.

The pork price had risen 28.4pc, accounting for a quarter of inflation. Since then, China has been buying as much pork from Europe as it can, with flooding in July having taken further toll on pigs in a number of key provinces.

“All of a sudden China’s got a depleted pig herd,” says Vikki Campbell, senior analyst for pork at the Agriculture & Horticulture Development Board. “But it’s still got to satiate its demand for pork, so it needs to get it in from somewhere.”

Concerned by public health and climate change, Beijing recently outlined plans to halve Chinese’ citizens’ meat intake by 2030. Before then, though, that “somewhere” is here. Sterling’s value is low after the referendum, and that helps: British pork is now at its highest price in a year due to Chinese demand and Chinese consumers’ preference for food from the Anglosphere.

Dr Deng says that the “Peking Duck” sold by China’s best restaurants is often imported from Scotland, and that the enthusiasm for British-style food is so great that in some cases English vocabulary is supplanting Chinese.

“The Chinese equivalent of bacon is ‘huotui’, meaning ‘smoked leg meat’,” Dr Deng says, “and has been around for 300 years. Now in Chinese supermarkets they call it ‘peigen’, to mimic the sound of ‘bacon’.”

For their part, pig farmers in the UK are more excited about the opportunity to rejuvenate their sales than they are perturbed by the idea of propping up the Communist Party by helping it keep pork prices stable.

“I think the Chinese government does a lot worse,” says James Wright, a 24-year-old pig farmer who keeps around 400 of the animals in West Sussex. “It’s a human right to eat, and as a farmer, I want to sell food.”