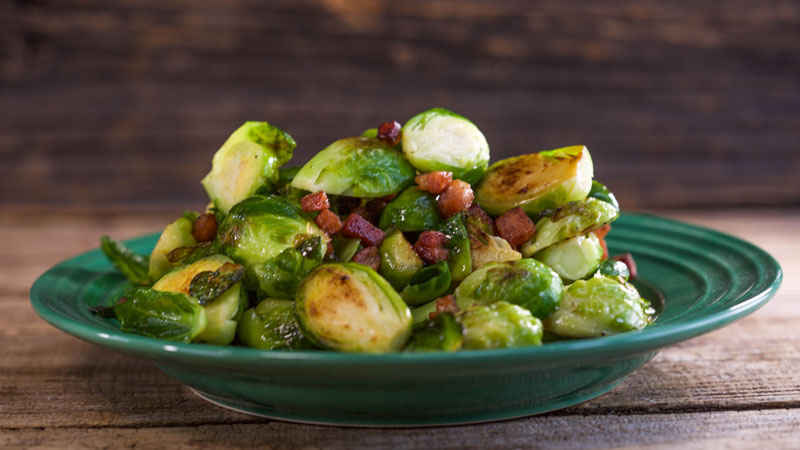 Brussels sprouts and bacon is one of our favourite combinations— a perfect marriage of textures and flavours. Brussels sprouts are robust enough to stand up to salty, chewy bacon, and in turn, the smokiness of the bacon highlights the sprouts’ earthy notes. We like to blanch my Brussels sprouts before roasting; we think that the resulting soft, cooked inside and crispy outside make for an unbeatable texture and taste. Blanching, followed by roasting, also brings out the sweetness and keeps the vegetables moist. While it seems like an unnecessary step, skipping blanching often results in dry and often undercooked-tasting vegetables.

Bring a large pot of salted water to a boil. Blanch the Brussels sprouts in the boiling water for 2 to 3 minutes. Drain.

Meanwhile, in a large sauté pan, cook the bacon over medium heat until the fat has rendered out and the bacon is crispy and brown, 6 to 7 minutes. Add the Brussels sprouts to the pan in a single layer, cut side down, and cook, without stirring, until the sprouts are lightly browned, about 3 minutes.

Stir and continue to cook until the sprouts are browned on the other side, 2 minutes more. Season with salt and pepper to taste. Divide the bacon-sprout mixture among four plates and serve immediately.