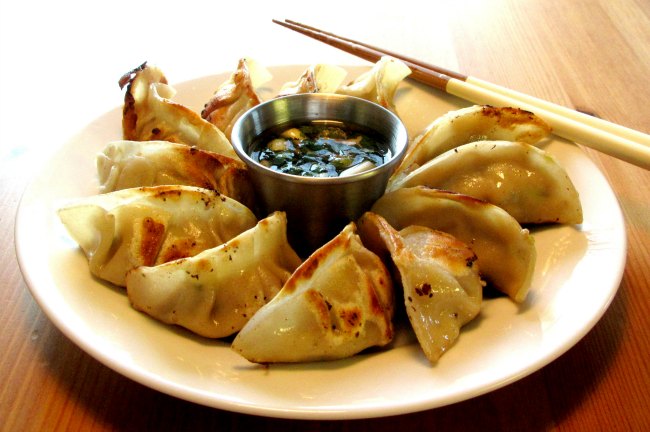 These pan-fried pork dumplings, known as ‘potstickers’, turn crispy once cooked. The perfect addition to a dim sum feast.

Guo tie, the traditional Chinese phrase for pan-fried dumplings, literally translates to “pot stick”, hence the popular name for these dumplings. The combination of a lush, juicy pork filling and crispy golden bottoms is so divine that stopping at one is impossible.

Using a pair of chopsticks or a fork, mix the flour, salt and 200ml boiling water together in a large bowl until you have a rough ball. Be careful, as the dough will be scorching hot. Remove it from the bowl and knead for 10 minutes, or until smooth.

Divide the dough into two even pieces then use your thumbs to make a hole in the middle of each piece before stretching them out into bagel shapes with even thickness all the way round. Cover the “bagels” with cling film and leave to rest for 20 minutes.

If you are using pork shoulder, cut it into roughly into 1cm cubes. Then use a heavy knife or a cleaver to dhuk it (chop repeatedly) through the pork until it resembles coarse mince. Put the pork into a large bowl. Add the bicarbonate of soda, cornflour, seasonings, rice wine, soy sauces, sesame oil and 3 tablespoons water, then use a pair of chopsticks to stir vigorously in one direction (e.g. clockwise) until all the liquid is absorbed and the pork begins to bind to itself. Mix in the pak choi, spring onions, ginger and garlic.

Lightly flour your work surface. Cut one of the rested “bagels” in half so you have two sausages the same size, then roll the sausages quickly, so they are evenly thick along their entire length. Line the two sausages together lengthways and cut them in half in the middle to create four mini sausages. Now line the four sausages lengthways to form a roughly square shape and cut through them three times to form 16 small pieces of dough. Repeat with the other “bagel”.

Lightly toss the dough pieces in flour, then put a piece on the work surface, cut side down, and flatten it. Roll the dough into a thin disc, about 9cm in diameter, then repeat with the remaining pieces. Keep the dough covered to prevent it drying out. If you are short on time, you could roll the dough to about 2mm thick and use a 9cm-round cookie cutter.

To wrap the dumplings, put a heaped teaspoon of the filling into the centre of each wrapper. Fold over into a half-moon shape. Cradle the wrapper in one hand and use the other hand to create pleats along the edge farthest away from you, pinching the two edges together after each pleat as you go, to create a crescent shape. Avoid getting any filling on the edges and be sure to pinch firmly as you pleat to create a good seal.

Heat the oil in a large non-stick frying pan over a medium heat. Fry the dumplings, in two batches, flat-side down for about 2 minutes until a golden crust forms on the bottom. Add 100ml cold water and immediately cover with a lid (or a heavy plate). Let the steam cook the dumplings for 8 minutes, or until all the water has evaporated, then uncover and cook the dumplings for a further minute, or until they lift off easily from the base of the pan. Repeat with the second batch.

Article taken from the Telegraph