The much-loved bacon sandwich needs no hagiography from me, the holy trinity of bread, salty fatty pork and piquant sauce being a bona fide national institution. Indeed, so central a part does it play in British culture that it’s impossible to imagine any other dish which so reliably raises the national spirits in times of trouble – devoured by hungry builders, peckish pensioners and footsore royal wedding goers with equal enthusiasm, it’s the simple pleasure which unites the country. And if you don’t eat pork, I’m sorry. Trust me, if you did, you’d love bacon sandwiches just as much as the rest of us.

But, as in so much of life, when passions run high, tempers can flare – the church of brown sauce stands firm against the house of ketchup and the disciples of toast are willing to take up arms against their bready brethren. Back or streaky; grilled or fried; butter, dripping or even mayo – a Britisher’s buttie is his castle, and he’ll defend it to the end. Personally, I always go for grilled back bacon between sourdough toast with enough English mustard to make me sneeze but … could I be missing out?

In Class, her seminal anthropological romp through British society, the brilliant Jilly Cooper quotes a shopkeeper on the subject of bacon: “When a woman asks for back I call her ‘madam’; when she asks for streaky I call her ‘dear’.” Lean and meaty, back bacon is clearly the premium choice – but my confidence is shaken when I read the godlike Nigel Slater prefers streaky “because I like the fat as much as I like the lean, and I don’t think anything else is right for a bacon sandwich.” I like fat too, I think. Why have I never considered streaky worthy of my breakfast table?

Jamie Oliver, as far as I can tell from the grainy black and white picture that accompanies his “bacon sarnie my stylie” in The Return of the Naked Chef, appears to favour back bacon. I’m torn: the fried streaky is utterly fattily delicious, but on its own it’s too much of a good thing – like cheese and butter, or a piece of pork belly with more fat than meat. The back, however, is good like a curate’s egg – unless folded over to ensure a piece of both fat and lean in each mouthful, it’s rather dry and thus disappointing.

Fellow Word of Mouther Tim Hayward, who has investigated the subject in typically forensic detail, informs me that at his Cambridge cafe, Fitzbillies, they favour a mixture of back and streaky, which is the kind of fence sitting I could really get into. (If you can get middle bacon, which is the best of both worlds, even better.) Jamie mentions thicker-cut bacon in his advice – although I agree that wafer-thin stuff is often disappointing, anything too chunky risks jeopardising the all-important crunch factor, so I’m going to stick with a standard cut.

Finding a good piece of dry-cured bacon is essential – you don’t want your meat to give off too much water during cooking, or it will boil in its own juices and you can wave goodbye to any hope of crispness (as one Jonny Neale helpfully advises on twitter, if you find yourself with water in the pan, remove the bacon, pat it dry, clean out the pan and add a little oil before continuing cooking).

I find the stuff sliced to order at the butchers tends to be the driest, but, as with most meat, buying the best stuff you can find and afford is usually a good rule of thumb. And it goes without saying that you need smoked bacon for a sandwich – I will countenance no deviation on this point.

I generally grill my bacon, more out of habit than anything else – it makes sense for a fry-up, where there’s no room in the pan for bacon, and I’ve adopted the same policy even if it’s the only thing I’m cooking. But, although I love the slightly charred dryness of grilled bacon, it strikes me that all the lovely fat which provides so much flavour is going to waste at the bottom of the grill pan, which seems a shame, especially when the back has so little of the stuff to start with.

Ever the maverick, Jamie Oliver eschews both the grill and the frying pan. “If you fancy yourself as a bit of a tiger” the young and still Naked Chef writes, “then acquire a ridged griddle pan” to cook your bacon in. I do indeed fancy myself as a tiger – especially if this smoky, charred stuff is what those noble creatures eat for tea. The flavour is happily reminiscent of barbecued bacon rolls the morning after a big summer party – crisp, but not greasy.

The other important component in a bacon sandwich is, of course, the sandwich itself ie bread. There seems to be rare consensus that it must be white (“unless you need your roughage” Jamie adds), and for once, I agree: much as I love the nuttiness of brown bread, it’s too assertive for this dish: the bread needs to be a vehicle for the bacon, not its co-star.

Nigel Slater reckons that somehow a bacon sandwich is “better with factory-made ‘plastic bread'”, a claim echoed by many on Twitter. Although I have a nostalgic fondness for cheap white sliced bread, following a four slice a day toast habit at school, I can’t agree here; it’s pappy and squidgy and glues itself to the top of my mouth. The horror.

Out of curiosity, however, I also try something called a “milk roll”, after Tim discloses that, after months of experimentation, Fitzbillies settled on a “custom-baked soft milk roll: floury top, long oval shape to take rashers … “. This stuff is just like slightly sweet, oddly circular cotton wool though, and even worse than the more normally-shaped plastic bread – too late I discover that the Fitzbillies’ version is more of a soft bap, with a shot of milk in the dough. “Structural integrity is important” Tim informs me – and this has none of it.

Clearly, I need to give the roll a try instead. White and floury, and oddly difficult to find anywhere but the kind of bakers that specialises in large, coconut-encrusted jam cakes, I’m in unknown bacon sarnie territory here – but it’s a risk that pays off. Unlike my usual robust sourdough, which takes more chewing than the meat itself, the fluffiness of a bap is a lovely contrast to the crispness of the bacon while, as Tim observed, standing up sturdily to the weight of fillings and sauces. I’m not too happy with the flavour, or lack thereof, in the ones from the local bakers though, so I decide to make my own, based on a recipe from Elizabeth David’s English Bread and Yeast Cookery: as a concession to the rich savouriness of the bacon, I’ve replaced some of the milk in the dough with water, cut the salt, and added a little brown sugar instead.

The bread question doesn’t stop once the variety has been determined: there’s also the matter of its preparation to address. I like a bit of crunch to my bread, which rules out leaving it in its natural state. But toasting both sides, as is my wont, makes things problematically crisp – you need a lot of tea to wash down a toasted bacon sandwich. Toasting one side, as fiercely recommended by many tweeters, is better, allowing the softer side to soak up some of the ambrosial bacon grease, but this is hard to achieve with a roll, where one side of each slice is covered in a soft crust.

Nigel suggests frying the bread briefly in the bacon fat before assembling the sandwich, which is a nice trick, but even better is Jamie’s idea of charring it on the griddle – it picks up a little fat, a little crunch, and a lot of flavour, adding to the whole barbecue effect. I also try adding a little sugar to the pan to caramelise the bread lightly, as Dinan Gunawardena suggests on Twitter, but it smacks too much of French toast, a dish which made me violently sick aged 11 and has never since passed my lips.

I’m going to keep my opinions firmly to myself when it comes to ketchup or brown sauce (mostly because I prefer mustard and marmalade myself, and I think I’m on my own there), but the array of weird and wonderful toppings suggested on twitter deserve to be shared here. From @LadyVelo’s maple syrup (which is actually pretty good – with a dollop of mustard, naturally) to @Helen_Barlett’s mango chutney and smoked salmon, via salad cream, bananas and even smoked cheese, toppings really do seem to be very… individual.

I’m with Tim on the liberal buttering of the bread though – the creamy blandness of sweet unsalted butter is an excellent foil to the bacon. Come on – if you’re in need of the welcoming embrace of a bacon sandwich, a little extra fat is the least of your problems. 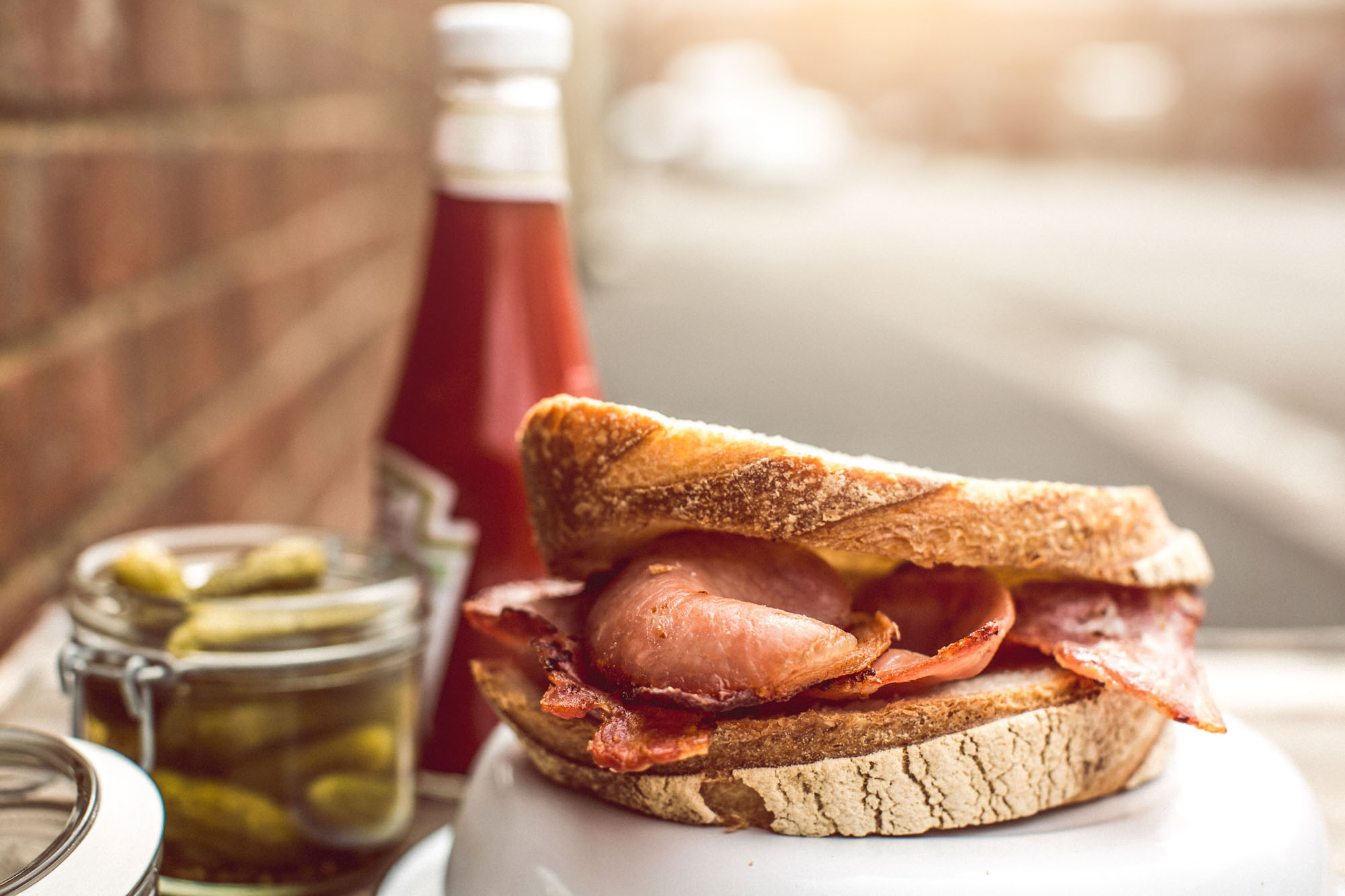 1. Sift the flour, salt and sugar into a large mixing bowl. Combine the milk and water and heat until tepid, then stir in the yeast. Mix this quickly into the dry ingredients until you have a fairly soft dough, adding a little more milk or water if necessary. Cover and put in a warm place for 1½ hours until well risen.

2. Preheat the oven to 220C. Divide the dough into 6 pieces and shape each into an oval (to fit the bacon), then space out on a floured baking tray, cover and leave for 15 minutes.

3. Brush the tops of the rolls with milk, sprinkle with flour, and poke a small indentation in the top of each one. Bake for 15–20 minutes until pale gold.

4. Heat a griddle pan over a high heat for about 4 minutes, then add the bacon (depending on how many you’re catering for, you may need to do this in batches, in which case have the oven on low so you can keep the cooked bacon warm until it’s all ready). Cook, without moving, until the fat begins to turn golden, then turn over. Once it’s cooked to your satisfaction, move to the edge of the pan.

5. Split each roll in two (the rougher the cut, the crisper the toasted side will be) and toast under the grill on the cut side for about 30 seconds until lightly charred. Butter, stuff with 2 rashers of streaky and 1 rasher of back bacon per person, and serve immediately.

Is the humble bacon sandwich the nation’s favourite dish – and can anything top it as a hangover cure? (What do vegetarians and other pork avoiders turn to after a hard night?) And why on earth would anyone soil them with ketchup or brown sauce?

This Article Originally Appeared in The Guardian