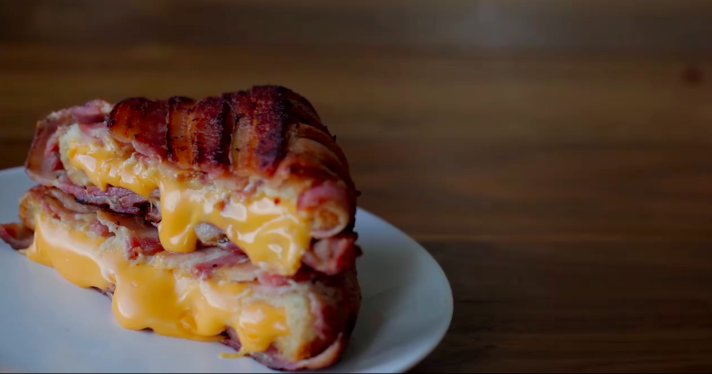 The research found that although 25 per cent of Brits prefer their bacon sandwiched between white bread slices, 21 per cent would rather have a white breadcake.

Only 6 per cent voted for brown as their favourite butty bread.

Other more unusual options chosen by the public included: stotties (a flat round loaf, common in the North East), sourdough, tiger bread and Belgian waffles.

While Brits tend to prefer their sandwiches plain and simple, with nothing but bacon and sauce, when they do want an additional ingredient, eggs are the winner, preferably fried.

According to the research, 31 per cent of Brits would add an egg to their butty if they were looking for some variety, 17 per cent would chuck in a mushroom and only 14 per cent would opt for cheese.

A small number of us are living outside the box and and would add an avocado or even a lightly fried banana to their butty. We’d like to hear from you if banana is your thing, as it’s a new one to us.

The research also identified a divide across the nation when it comes to ketchup or brown sauce.

People in the East of England or Wales tend to prefer ketchup, while those in the West tend to go for brown sauce in their butties.

The results of the research prove that bacon is still as popular as ever across the nation, despite claims that one bacon sandwich wipes off half an hour of your life.

Jazz Gakhal, Head of Direct Line for Business, the company that carried out the research, commented: “Bacon butties have been the staple British breakfast for years, helping fuel the nation as they head to work or wind down on the weekend.”

“The humble butty inspires passion and debate, and there are those that will always claim bacon needs ketchup, but brown sauce is the collective favourite.”

What is your favourite bacon sandwich recipe?